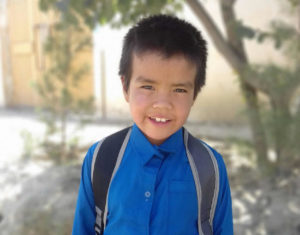 Mujeeb’s father lost his life in 2014 due to health issues. His conditions were curable, however, he could not get proper medical attention due to his financial situation, which unfortunately led to his death.

This left Mujeeb’s mother with complete responsibility for their family of eight. She lacked an education which made it difficult for her to find a job. Finally, she got a job in a small factory with very low income.

After one year, their financial situation was so bad she decided to go to one of her relatives and ask for a loan – without knowing what was to come.

The relative was in some kind of trouble, because after Mujeeb’s mother arrived at their house, a few gunmen broke in and started shooting. Unfortunately, Mujeeb’s mother was one of the victims of this shooting.

This left Mujeeb and his brothers and sisters in shock and utterly hopeless. His oldest 14 year-old sister was severely traumatized by not only the death of her father, but now her mother and she developed an inexplicable psychiatric condition. His older brother left home indefinitely.

Like so many other orphaned children in the world, 7 year-old Mujeeb was forced into caring for his brothers and sisters.

Mujeeb was going to school for half the day and for the rest of the day, he worked in a veggie market selling plastic bags, hoping to provide one daily meal for his brothers and sisters. There were many days that he was unable to make enough money to bring home a loaf of bread. Occasionally, their neighbor would help them and give them a meal.

It was getting harder for Mujeeb to attend school and continue working on the street. So, he decided to stop school and work longer hours to support the family, who were then all sleeping in one small room in their uncle’s house.

After evaluating the tragic circumstances of Mujeeb’s life, SOC decided to support him through our Relief Services program. Our goal is for Mujeeb to return to school and continue his education, and give him a little hope for his life.