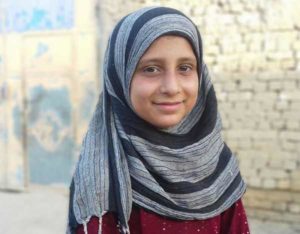 During the civil war, Mariam’s father, Shamsuddin, was an immigrant in Pakistan, so his motherless children had to live in the refugee camp.  Later on, the Pakistan government forced Shamsuddin and his children to move back to Afghanistan.

When they returned to Afghanistan, they discovered that their home had been destroyed. 11-year-old Mariam and her family were forced to move and they settled in Mazar-e Sharif, the second largest city in Afghanistan.

In 2015, Mariam’s father became ill and passed away, leaving four sons and three daughters behind. The children were left with no support and unable to pay for their rent, food and other living expenses.  Their uncle gave them a small bedroom in his house so they would have shelter.  All five kids had to sleep in the same room.

Mariam had to drop out of school after the fifth grade since the uncle simply did not have enough money to pay for the children’s education. He used the children as shepherds, to watch his lambs and animals.

Mariam never lost hope and continued to have high goals in her life and dreams to continue her education.

After evaluating Mariam’s life and complications, the Source of Compassion board members have decided to help Mariam through the Relief Services program and make her dreams come true.  She is now able to return to school and is excited about continuing her education.